Statements on USA Events Affecting Us

​From the President of the Southern California Conference

I am still stunned by the news over this past weekend regarding the “Children Detention Centers” established to process children who are in this country illegally. Although all of us have known about detention centers, naively we have associated them with adults only. But within the last week, all of us have been impacted by the outrageous behavior reported in the news as a result of this “zero tolerance policy” and its effects on children who are being ripped away from their parents, especially infants, while they are processed by the immigration office.

As the media has disclosed details in their reports, all this activity has caused indignation as to how far politicians will go to further their agendas, claiming that these actions are for the collective benefit. All of this has reached the level of inhumanity and insensitivity toward the most vulnerable people on earth: children.

Yes, we as a church always have supported and still support our government, as long as they act on Christian and humanitarian principles. Jesus never supported any type of abuse, and we as His followers should take heed of His words: “Then He took a little child and set him in the midst of them. And when He had taken him in His arms, He said to them, ‘Whoever receives one of these little children in My name receives Me;  and whoever receives Me, receives not Me but Him who sent Me.’” (Mark 9:36-37, NKJV)

I join my colleagues in the Adventist denomination by speaking out against this type of abuse:

I invite you to contact your congressman or congresswoman to bring an end to these heinous acts. In the meantime, let’s pray for these families who have been separated.

There has been a lot of discussion about political decisions in the United States recently.  While we very firmly believe in the separation of Church and State, we have a moral obligation to stand for what is right.

We are to receive this word as supreme authority. We are to recognize human government as an ordinance of divine appointment, and teach obedience to it as a sacred duty, WITHIN its legitimate sphere. But when its claims conflict with the claims of God, we must obey God rather than men. God's word must be recognized as above ALL human legislation. A "Thus saith the Lord" is not to be set aside for a "Thus saith the church" or a "Thus saith the state." The crown of Christ is to be lifted above the diadems of earthly potentates. {AA 68.2}

Links to the NAD and PUC pages: (You are welcome to share the links to the following pages.) 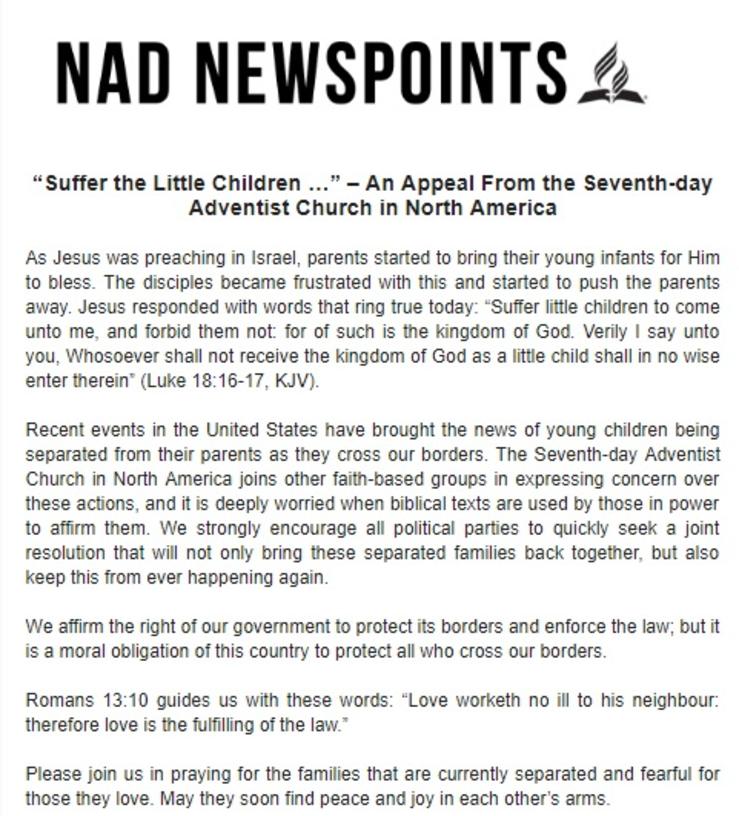 From the President of the Pacific Union Conference

Seventh-day Adventists regard the nurture and protection of children as a sacred trust. All Americans, and particularly people of faith, must raise their voices to condemn the demonization of these immigrant families as criminals. Many are fleeing violence and lawfully seeking refugee status. Jesus Christ declared that the way we treat those we regard as “the least of these” is how we treat the Christ. In their treatment of immigrant and refugee families our leaders are demonizing Jesus himself! Many proclaim America to be a Christian nation. Yet those who reject the fundamental teaching of Jesus to give a cup of cold water to the thirsty, feed the hungry, clothe the naked, and give shelter to the stranger mock God and lose any right to claim the name of Christ.

A growing number of Christian and religious leaders are speaking out about the cruelty being inflicted on children of immigrants and refugees by the new “zero tolerance” policy of the Department of Justice. Others have spoken out about the abuse of scripture to justify such cruelty. Indeed, Romans 13 has not only been used in the past to encourage compliance with the fugitive slave law, requiring the return of runaway slaves to their bondage, but Romans 13 was also used to obtain the compliance of the Christian church in Europe during World War II. God has ordained our leaders and our government, the flawed logic holds, and our duty is to obey and to comply. The abuse of scripture to justify inflicting harm on children is truly a heinous sin.

Seventh-day Adventists hold dear the value of religious liberty, but we are compelled to stand up and speak loud and clear when religion is used to harm others. Our role as believers and as citizens is to hold our nation’s leadership accountable to a high moral and ethical standard in the interpretation of our laws.

Every believer should condemn the abuse of the law to support an official policy of child detention and abuse. The same biblical passage that has been abused to justify this policy declares that “love does no harm to a neighbor, therefore love is the fulfillment of the law.” The proper function of law is to preserve the welfare of society, its peace, and the rights of its people. To use the law as a means of oppression, as the Department of Justice is doing, is to degrade respect for the law itself, to undermine the foundations of our democracy, and to bring shame upon our entire nation.

America is a nation of immigrants and has always been a compassionate nation. Whether measured by charitable giving in support of disaster relief, development, or foreign aid by our government, Americans have surpassed other nations in showing mercy and compassion to those suffering famine, hunger, and other deprivations. The United States has championed democracy, human rights, and civil and religious freedom around the world.

But in this matter we are champions no more. A policy that seeks to accomplish a social and political goal by tearing apart families and harming children is a stain on our national character that will be difficult to erase. Thus, we are compelled to rise up and seek to relieve the suffering of these immigrant children who are languishing in detention centers, torn from their mothers’ arms.

Our thoughts and prayers must turn into actions and deeds. All those who still cherish the values America stands for must demand action from Congress to end this policy.  We ask all of you to write or call your congressional representatives, speak out in your own personal and community settings against injustice, use your voice on social media, and use every right you have as a citizen to challenge and change the policies that inhumanly, carelessly, and needlessly take children away from their parents.

“Seventh-day Adventists place a high value on children. In the light of the Bible they are seen as precious gifts from God entrusted to the care of parents, family, community of faith and society-at-large. Children possess enormous potential for making positive contributions to the Church and to society. Attention to their care, protection and development is extremely important. The Seventh-day Adventist Church reaffirms and extends its longstanding efforts to nurture and safeguard children…. The Church regards the nurture and protection of children as a sacred trust.”  (This statement was approved by the General Conference of Seventh-day Adventists Executive Committee on June 23, 2010, in Atlanta, Georgia.)

“Seventh-day Adventists affirm the dignity and worth of each human being and decry all forms of physical, sexual and emotional abuse and family violence…. We accept our responsibility to… listen and care for those suffering from abuse and family violence, to highlight the injustices, and to speak out in defense of victims.”  (This statement was approved and voted by the General Conference of Seventh-day Adventists Administrative Committee (ADCOM) and was released by the Office of the President, Robert S. Folkenberg, at the General Conference session in Utrecht, the Netherlands, June 29-July 8, 1995.)

“The health and prosperity of society is directly related to the well-being of its constituent parts—the family unit. Today, as probably never before, the family is in trouble…. The Seventh-day Adventist Church, in this time of family crisis, encourages every family member to strengthen his or her spiritual dimension and family relationship through mutual love, honor, respect, and responsibility.” (This public statement was released by the General Conference president, Neal C. Wilson, after consultation with the 16 world vice presidents of the Seventh-day Adventist Church, on June 27, 1985, at the General Conference session in New Orleans, Louisiana.)